Mlékárna Hlinsko dairy was founded in 1939 and production there started in 1943. In the first year of its operation the dairy processed two million liters of raw milk which were used to produce powdered milk, condensed milk, butter and dried buttermilk.

After 70 years of its operation it handles nearly 200 million liters of milk per year and its production program was expanded to include long-life milk and cream, ice cream and crushed ice.

In 1947 the company performed and carried out its first exports of the products. The dairy currently exports to more than 25-countries arround the world.

Since 1964 the products are available on the market under the corporated brand Tatra, which has been used since that on. Mlékárna Hlinsko dairy has expanded its production by products such as Tatra Zmrzka (ice cream) and Tatra Professional (which are delivered within the gastro segment and used by professional chefs). 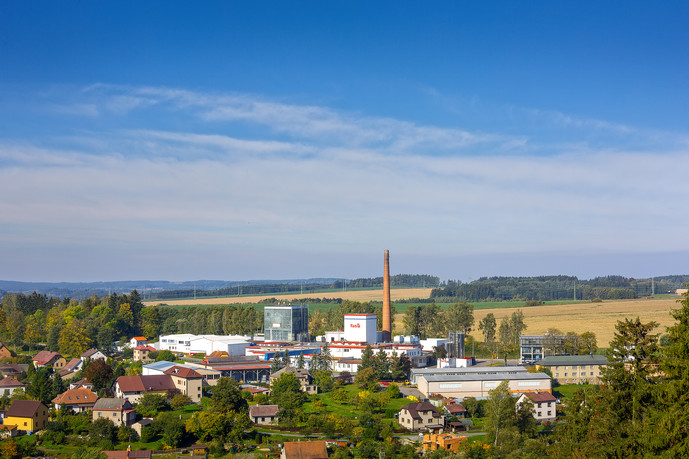 Mlékárna Hlinsko is proud of the first-class quality of its products. Hlinsko is situated in the Bohemian Moravian Highlands, an area particularly known for its clean and unpolluted nature, which definitely contributes to the excelent taste of the milk. The feedstock always comes from the Czech farms and breeds and it is checked regularly and thoroughly.

At the same time, Mlékárna Hlinsko puts large investments into the best manufacturing procetures and technologies and also into quality management system.

Thanks to that it is possible for all dairy products not only to reach their top quality, but also keep their exceptional flavor. The Mlékárna Hlinsko dairy is certified with the ISO 9001, HACCP and the international IFS certificates.

Since 2011 has been a member of the conpanies joint under AGROFERT, a.s.

In May 2012 the Mlékárna Hlinsko dairy changed legal form and from a limited liability company become a joint stock company.

We use cookies to personalize content and ads, provide social media functions and analyze our traffic. We share information about how you use our site with our social media, advertising and analytics partners. Partners may combine this information with other information you have provided or obtained as a result of using their services. Information on the processing of the personal data.